Edson C. Hendricks is the subject of the enhanced ebook iPad app I developed for Agio Studios last fall. I was thrilled to meet Edson at the app launch party, and was honoured to spend so much quality time with him listening to his stories. 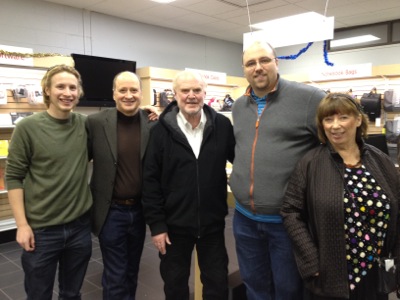 My understanding is (was) Edson's never owned an Apple product. I know he has very strong opinions on platforms and believes in simplicity because complexity kills quality. So imagine my delight when I saw this email in my Inbox.

Today I did it! I now have a brand new iPad, the biggest one with the 4G LTE (which automatically switches to Wi-Fi if it's available, and back to 4G LTE if not, which is even better than I expected). The rumors about the new iPad being "sold out" are true evidently at only some Apple stores. I also got a (soft) Bluetooth keyboard and case for it.
And, right there at the local Apple Store, they walked me through the setup, but used the opportunity to get me familiar with using the iPad. Wow, what an operation that place is, it's practically beyond belief. It was real crowded there, but the staff were so darned efficient I barely noticed. I believe I can now download from the App Store, and the 4G LTE connection is all set up with Verizon, and the email should work as well. They assured me that if I had any problem I could come back and they'd figure it out. I heard on the radio this morning that Apple is now the most valuable company in the world, and it's easy to see why. I had fun telling the people at the Apple Store that I worked for IBM when it was that, the biggest computer company and the richest company in the world, and they lost it all by effectively betting against the Internet.

And I have the COOL app on my new iPad now, downloaded right there at the Apple Store so I could show it to the folks there. The guy who helped me with it all went into the back to get his manager, who came out to meet me. They were really amazed at both the story, and the look of the app. The manager confirmed that she's never before seen anything quite that good, and she was going to download it herself at the bargain price of $2.99! Good, then they can show it off there at the Apple Store. And they agreed about the story, that it was odd that they also had never heard any clear story about where the Internet actually came from. I assured them that it was all because up to now I had decided just not to talk about it, for good reason, haha! They were just amazed, what fun.